Using furniture-based work that include writings and mixed media, I imagine the voice of Sara Baartman, the South African Khoikhoi woman who became known as the “Hottentot Venus” in early 19th-century Europe. Baartman is represented by fictional diary entries that cross time and space and speak to other historical and contemporary figures such as Charles Darwin, the famous 19th-century French naturalist George Cuvier, Josephine Baker and Lil’ Kim. This work seeks to bring to light the ensuing complexity and complicity in the objectification of Black female bodies and the fetishizing of Black female sexuality.

Baartman was the curiosity of famed French naturalist Georges Cuvier, who upon her death unceremoniously dissected her body, put her brain and genitals in bell jars and used them to support his theories of “Hottentots” as the missing evolutionary link between animals and humans. This piece includes a representation of Cuvier’s famous 1817 treatise: "Extrait d’observations faites sur le cadavre d’une femme connue a Paris et a Londres sous le nom de Venus Hottentote". According to some accounts, Baartman was said to have been made to perform for European audience on a stage and in a cage.

This body of work was generously supported by The Artist in Residence Program at The School of Art + Design at Purchase College in New York, and The Peck School of the Arts at the University of Wisconsin Milwaukee. 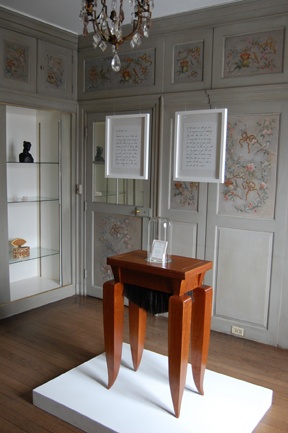 The Baartman Diaries
< previous next >