I am curious about how we SEE–how we construct our visual realities and how they are influenced by cultural, social, gender, geographical and intellectual perspectives and biases.

This series of three diptychs looks at the visuality of race and gender and asks: how transparent or opaque are superficial racial signifiers in twenty-first century society? How capable are we as modern citizens of seeing through these identifiers to recognize individual humanity? Are we even aware of the unconscious racial and cultural constructions we impose on others? Has the impact of media, technology, privilege and access to global resources, created a culture with such coded visual vernacular that we take for granted the control our subconscious exercises on much of our collective psyche?

In this work, I built three simplified iconic furniture forms–a lamp, a table and a chair– and documented a "performance" of sorts, portraying myself as those objects. Meant to be humorous, it speaks to serious and unresolved issues of America's racial history and strongly embedded attitudes towards women.

How should one read these images? What responses are solicited by the collision of multiple and potential meanings and representation in body, object, color and gender in a single work? Is black seen as a formal color, a race or a culture? Have women and women of color in particular, indeed risen beyond identities of servitude in society's and our own minds?

This body of work was supported through the generosity of the Anderson Ranch Arts Center in Snowmass Village, Colorado, where I was awarded a residency in the winter of 2006, and a Professional Development Grant from the Rhode Island School of Design. 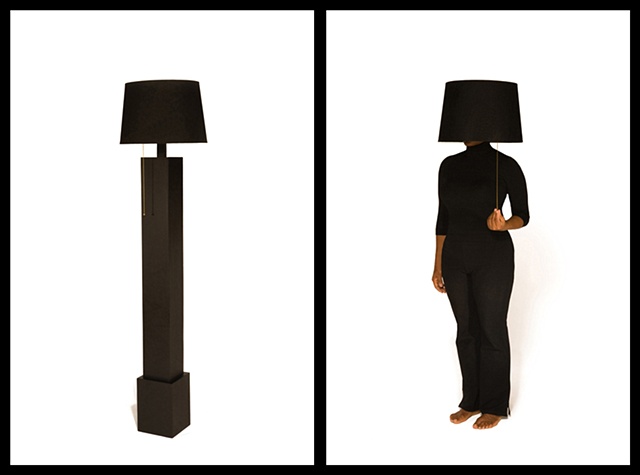